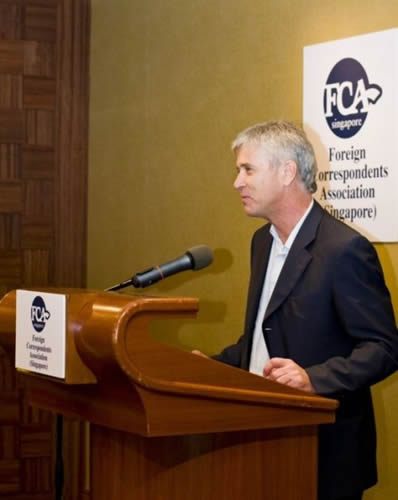 It's the latest player on the global television news scene... Al Jazeera English.

Having taken many of the best & brightest from other major news networks around the world, Al Jazeera English has, in many ways, a "Dream Team" of broadcast news staff.

So How closely related is it to Al Jazeera Arabic? Does the English-language  network have editorial freedom and who sets editorial policy?

Come and hear Al Jazeera English Managing Director, Nigel Parsons, talk about the birth of the network and where it is today. Ask your questions, too!

From Wikipedia:
Al Jazeera English is a 24-hour English-language news and current affairs TV channel headquartered in Doha, Qatar. It is the sister channel of Al Jazeera.

The channel was launched on 15 November 2006. It had aimed to commence global broadcasting in June 2006 but had to postpone its launch because its HDTV technology was not ready. The channel was due to be called Al Jazeera International, but the name was changed one day prior to launch.

The channel had expected to reach around 40 million households, but it far exceeded that launch target, reaching 80 million homes. It is not currently  available in Singapore.

As of 2007, the channel is one of the three largest global English language 24 hour news channels, the other two being BBC World and CNN International.

Al Jazeera English is the world’s first English-language news channel headquartered in the Middle East. The channel aims to provide both a regional voice and a global perspective to a potential world audience of over one billion English speakers, but without an Anglo-American worldview. Instead of being run under central command, news management rotates around broadcasting centres in Doha, Kuala Lumpur, London and Washington, DC, "following the sun."

Note - Lunch cancellations within 24 hours of the event will be charged at full price. Thanks for your understanding)