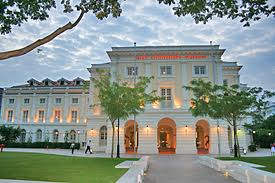 FCA journalist members are invited to go on a Director's Tour of the Asian Civilisations Museum’s new Trade gallery.

The gallery presents a selection of marvellous objects - carved in ivory, finely worked of silver and gold, potted and glazed, woven and dyed, crafted from tortoiseshell and exotic woods - that tell stories of commerce and cultural exchanges throughout history. The display spans 615 sq m, an area that covers more than half of the gallery space at level one of the museum.

The opening of the Trade gallery marks the completion of the permanent galleries on level one of the museum, which includes the Tang shipwreck, and presents the broad theme of Trade and Exchange of Ideas. This theme ties with Singapore's long history and tradition as a trading port and emporium for global interactions. With over 800 objects currently on display at this level, visitors are presented an opportunity to explore the cross cultural connections that inspired the creation of the art on display.

(i)  Kendi - Kendis are water vessels common in Southeast Asia, but they are rarely made in silver. The example on display, made in China, around 1680 to 1700, was probably produced for an elite buyer in Southeast Asia, which shows that markets in this region also played an important early role in Chinese export art.

(ii)  Ewer in the form of a dancing woman - This colourful dancing woman is actually a water pitcher: her raised arm forms a spout, her lowered arm on her hip, the handle. An almost identical ewer was owned by the Mughal emperor Jahangir around 1600, and is depicted in an album commissioned by him. Only five other examples of this type are known, several from old Japanese collections. This suggests that elaborate Chinese porcelain appealed to elite collectors of different cultures.

(iii)  Cabinet - The decoration of this cabinet shows the prevailing taste at the court of the Mughal emperor Shah Jahan (reigned 1627-58). The external surface is rather discreet, but when the doors are opened, a lush world of flowers is revealed. This object was likely made at the Mughal court. The ivory inlays are of high quality, and the rows of flowers commonly appear in objects made at the Mughal capital, Agra. Similar motifs can be found in drawings, textiles, and buildings such as the Agra Fort and Taj Mahal.

Come join Dr Alan Chong, Director of Asian Civilisations Museum, on this exclusive tour and explore art made for export from India, China, Southeast Asia, and the Islamic world.  Dr Chong will share stories about the objects on display and insights into the challenges faced installing the new gallery.